While many of my AWS colleagues are preparing for SAPPHIRE NOW, I thought this would be a good time to bring you up to date on what we have already done to make AWS a great home for SAP’s products and to share our plans to make it even better.

The Story So Far
Our enterprise customers want to bring gigantic, memory-intensive workloads to the AWS Cloud. with a special focus on large-scale production deployments of SAP HANA. Here’s what we have done so far to meet this important requirement:

May 2016 – We announced the x1.32xlarge instance type with 2 TB of memory, purpose-built for running SAP HANA in the cloud.

August 2016 – We announced SAP certification and support for scale-out clusters of up to 7 nodes and 14 TB of memory.

October 2016 – We announced the x1.16xlarge instance type with 1 TB of memory, perfect for testing and for smaller SAP HANA deployments, along with increased regional availability for both of the X1 instances.

May 2017 – We announced the x1e.32xlarge instance type with 4 TB of memory and SAP support for very large scale-out SAP HANA clusters of up to 17 nodes (34 TB of memory).

November 2017 – We announced SAP support for even larger on-demand SAP HANA clusters with up to 25 x1.32xlarge nodes (50 TB of memory).

Along the way, we have been working with customers like Brooks Brothers, Visy, Sumitomo Chemicals, and Kellogg’s to build business-critical HANA implementations on AWS. These customers (and many others) have improved their agility, realized cost savings, and increased performance as part of their move to the cloud.

Right Here, Right Now
As you may know, the C5 and M5 instances are powered by the latest Intel® Xeon® Scalable (Skylake) processors, and make use of our new lightweight, hardware-accelerated Nitro hypervisor. Both types of instances are fully certified by SAP, and deliver a measurable performance increase with respect to their predecessors. The Nitro Hypervisor provides consistent performance and increased compute and memory resources for virtualized EC2 instances by removing host system software components. It allows us to offer larger instance sizes (like c5.18xlarge) that make just about all of the server’s resources available to customers.

As an indication of our progress over the last couple of years, our first SAP certified NetWeaver installations on m2.4xlarge instances delivered 7400 SAPS (925 per vCPU). Today, the m5.24xlarge instances can deliver 135,230 SAPS (1409 per vCPU), our best performance to date. You can read the new SAP benchmarks for C5 and M5 instances, along with Measuring in SAPS, to learn more.

In the Works – Instances with More Memory
Our collaboration with SAP began in 2008 with the goal of providing our customers with options for running their mission-critical SAP systems in the cloud. We worked side-by-side with SAP to enable production deployments of HANA in 2014, and now offer a wide range of EC2 instances that are certified by SAP to run HANA.

Our goal is to make it as easy as possible to run HANA and to provide you with instance sizes that are a great fit for many different applications and installations. At the last SAPPHIRE NOW conference, we announced our plans to launch EC2 instances with 8 TB to 16 TB of memory. Today I would like to tell you a bit more about the specs and sizes for these instances.

We are planning to launch high-memory EC2 Bare Metal instances with 6 TB, 9 TB, and 12 TB of memory, designed from the ground up to run mission-critical deployments of SAP HANA. Like the existing Bare Metal instances, these instances allow the operating system to run directly on the underlying hardware while still providing access to all of the benefits of the cloud as full-fledged members of the EC2 family.

The instances run on an 8-socket platform built with Intel Xeon Scalable (Skylake) processors. They can be launched in a VPC, offer ENA-based Enhanced Networking and EBS-optimization by default, and are available on EC2 Dedicated Hosts. You will be able to launch them in all of the usual ways, and to use IAM to control authentication, authorization, and auditing. Instances will be able to make use of multiple EBS volumes, each storing up to 16 TB of data, for elastic capacity.

I did not have the opportunity to go hands-on with the new instances, but my colleagues shared a few screen shots with me! Here’s some of the output from dmesg on an instance with 6 TB of memory:

And here’s what lscpu displays: 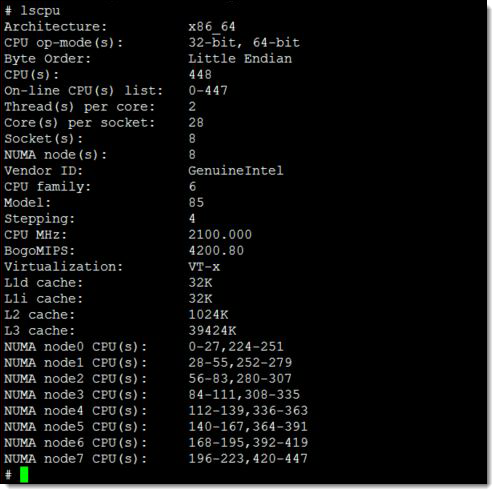 We plan to make these instances available in private preview this summer, and to move them to general availability this fall. While 12 TB instances are certainly a big step forward, we don’t plan to stop there, and are working on even bigger ones — instances with more than 16 TB of memory are in the works as well!

This is a clean, simple, and efficient alternative to installing the SAP GUI on every desktop. Response time improves, as does user productivity, because less data moves between client and server. Replacing hundreds or thousands of installed copies of SAP GUI with a centrally managed image also reduces the overall management effort.

To learn more about this cool new way to make the SAP GUI available to your users, read Deploying SAP GUI on Amazon AppStream 2.0.

Say Hello at SAPPHIRE NOW
The AWS team will be in booth 642 at SAPPHIRE this week with a full set of sessions from our team, our customers, and our partners in our in-booth theater. Many of our customers will also be telling their stories during sessions throughout the event. A listing of available sessions and activities can be found here.

Check out our client successes in 2019 and our client start page. If you're looking for an SEO we'd encourage you to visit our Client Portal.

Hire Us For Your SEO!

We're available and eager to work with you and your unique situation. It's hard to show you premade packages and set pricing without knowing your needs.

That's why its best to meet with us for a brief 30 minute consultation. No pressure, no sales people screening just a conversation about your site and what we can do.

Check out our client successes in 2019 and our client start page. If you're looking for an SEO we'd encourage you to visit our Client Portal.